Train delays in India are no longer funny! The track record below shows an average 20% increase in delays in the last 2 years and the numbers are only increasing. This RailYatri report brings forth a data centric approach to slice and dice the performance of trains across India and perhaps a first step towards finding a solution.

RailYatri’s National Train Delay Index is the cumulative national average of delays in arrival of train at a station on its route. It is important to point out here that we have considered all the stations across country to calculate this index. This is different from the practice which Railways across the world wherein only the delay at the last station is considered to calculate the delay index. We believe that considering all the stations makes it more ‘consumer’ centric.

The data based on ‘crowd-sourcing’ is collected by the travellers reporting through their mobile devices.

While internally we keep track of train delays on an on-going basis, we publish the comprehensive delay report at the end of the year. As an example – the report below is for the past entire year 2017.

Once accumulated through crowd-sourcing, the data goes through rigorous cleansing algorithms which separates the ‘good data’ from the ‘bad data’. Based on the rigor which has gone into building these algorithms, today after 4 years of continuing to publish this report, we remain very confident of the data which we have.

To get the correct picture of the delay index, we have used the data only between January 15 to December 15 (11 months). The severe train delays during the period of December 15 – January 15 due to fog in the northern India tends to skew the year-wide delay index. So we publish the delay data during this fog month separately from the remaining 11 months.

Something which regularly affects the lives of the citizens of the country have an index to easily figure out if that particular ‘thing’ is on the rise, holding steady or reducing (which could be good or bad based on what is being measured). For example there are already indexes to measure happiness, pollution, crime, etc. Needless to say train delays, which is a very common problem associated with trains in India, adversely affects travellers like us. So it was important to start calibrating the severity of delays and then keep track of it over the years. It was equally important to look at this data by slicing and dicing it through various dimensions to see the impact of it. With this background, RailYatri has been crunching the delay data and publishing the findings over the last few years.

+
Check what RailYatri's NATIONAL TRAIN DELAY INDEX has to say about 2017 delays!

+
Top 10 STATIONS In India with maximum/minimum delays. Check them out here.

+
POPULAR CITIES/STATIONS in INDIA & their Train Delay Index! Check them out.

+
Check out the Top 10 stations in India with IMPROVING track record!

+
See how LATE/ON-TIME is your Rajdhani, Duronto, Shatabdi and Superfast trains. 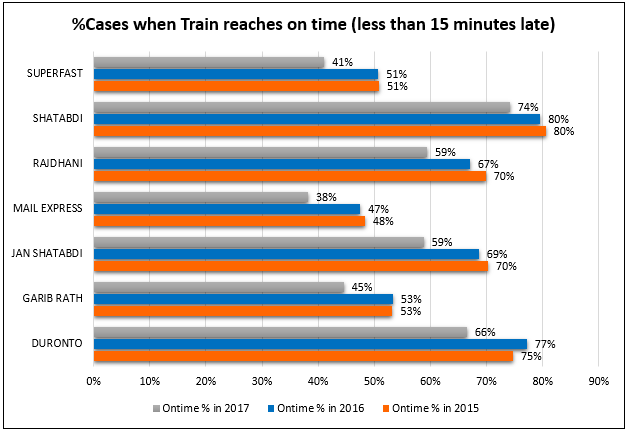 +
Did you know trains ON-TIME PERFORMANCE is best in August? 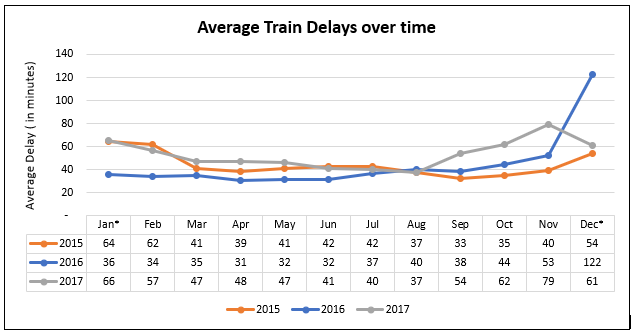 +
Check out which is the BEST STATION in your state!

+
TOP 5 Rajdhani & Duronto with maximum delays. Check them out! 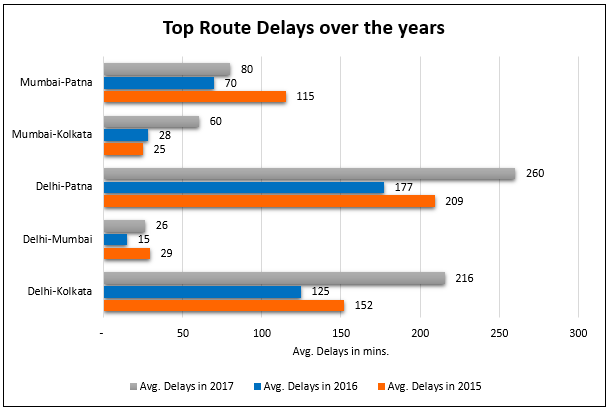 +
Trains with OVER 1000kms run have a higher risk of getting late! Check your train here.

+
Do trains with MORE STOPPAGES have higher train delays?

+
Do JUNCTION STATIONS have more train delays than non-junction stations?